Frazer-Nash was asked to undertake an economic assessment of an R&D facility that will be used to develop novel hydrogen production technologies.

There is growing interest in the production of low-carbon hydrogen from future high-temperature nuclear plants.

Frazer-Nash was asked to support the development of a concept study by undertaking an economic assessment of an R&D facility that will be used to develop novel hydrogen production technologies that can be coupled with high-temperature nuclear plants. The two technologies of interest were High Temperature Steam Electrolysis (HTSE) and Thermochemical Splitting of Water (TC).

The two objectives of the study were to predict:

The hydrogen production technologies of interest are very immature. Consequently, developing a cost model for the test facility and predicting the benefits the R&D facility may provide requires dealing with significant uncertainty; this was explored over the course of a series of initial workshops.

To deal with this uncertainty, we developed a parametric or “top-down” probabilistic cost model. This probabilistic implementation is useful for early-stage projects as the uncertainty in input parameters is captured and accounted for at the outset, and the outputs are provided in confidence bands. It also highlights the sensitivity of the results to the input parameters so that it is clear which assumptions and inputs require greater consideration as the design matures.

To estimate the capital and operating costs, the key parameters were identified and assigned values with uncertainty bands. The model highlighted the cost in a probabilistic format, showing the central estimate along with the 10th and 90th confidence bands.  The model also decomposed the variance in the cost distributions to highlight the contributions from each of the input parameters.

The model was also used to predict the extent to which the test facility will enable the lower LCOH of the novel hydrogen techniques to be realised. This involved developing probabilistic predictions for the Technology Readiness level (TRL) progression and industry take-up of these novel technologies and coupling these with 3rd party cost predictions for the technologies.

Our successful workshop approach, fully engaged the client into our work and development of the model. This cost modelling will help inform next steps for Nuclear Co-generation helping us achieve our Net Zero 2050 target. 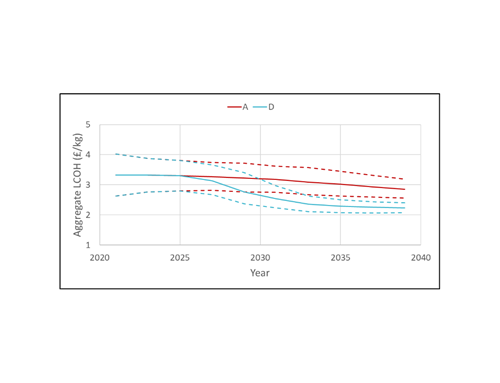 We help you make better informed business decisions through developing models that address your specific needs.

We bring our analytical skills to support clients in the groundbreaking area of nuclear fusion, from concept to delivery.

Our cybersecurity, information systems and software and modelling expertise deliver digital solutions for your business.

Read more
Back to all resources