Back to all news

Frazer-Nash's Anna Will has been selected as a finalist for the Institution of Engineering and Technology’s (IET) Young Woman Engineer (YWE) of the Year Awards 2021.

Anna Will, a Consultant within the System Design and Management team at Frazer-Nash, has been selected as a finalist for the Institution of Engineering and Technology’s (IET) Young Woman Engineer of the Year Awards 2021.

The main aim of the award is to promote engineering as a career for women, to help address the gender imbalance in the sector.

“This is an outstanding achievement for Anna, and we are really proud of her. Not just for making the final, but also for having the courage to put herself forward as a role model for young female engineers.

“Anna is involved in a broad range of technical multidisciplinary projects at Frazer-Nash, leading our medical technology campaign and previously leading our asset management service offering. She sets a benchmark when it comes to promoting STEM to young people – attending events at schools and universities, as well as undertaking individual mentoring of other engineers.

“Anna was also the Project Manager for the Wheels of Change Project with charity Whizz-Kidz – helping to design and build a wheelchair unlike any other. Enthused by the project and the children it supports, Anna was one of three Frazer-Nash employees to organise and enlist a team to undertake the London Marathon; raising a substantial sum in donations between them for the charity.”

“I’m so excited to be a finalist for this year’s Young Woman Engineer of the Year Awards, and to help encourage others to pursue a career in engineering

“It took some convincing for me to study engineering when I was at school as I felt it wasn’t for me, but I know that landmark projects like Wheels of Change and having more visible female role models would have really inspired me’

“Engineers will be the ones to solve the big global challenges our society faces today, and in order to come up with the best solutions, we not only want, but actually need, more diversity in the sector.”

Frazer-Nash will be sponsoring the awards again this year, where three prizes will be awarded on the night – the Young Woman Engineer of the Year Award, the Mary George Memorial Prize for Apprentices, and the Women’s Engineering Society Prize.

Alongside Anna, the five other finalists are:

The winner will be announced at the IET’s Young Woman Engineer of the Year Awards ceremony on Thursday 2 December 2021. For more information, visit https://youngwomenengineer.theiet.org/. 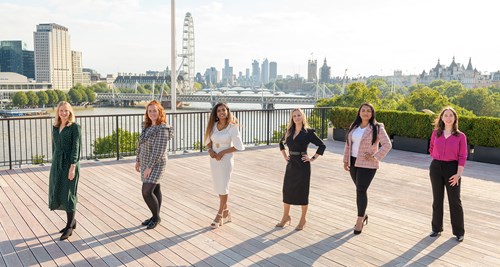 Anna, far left, pictured with the other Young Woman Engineer of the Year Awards finalists

Frazer-Nash is headline sponsor of the Association for Project Management South Wales and West of England Branch Conference, taking place in October.

Frazer-Nash has recently become a ‘business hero’ through sponsoring ten Devon and Plymouth based social enterprises.

A team of 23 runners from Frazer-Nash will be taking on the 26.2 miles of the London Marathon on Sunday 3 October, in support of mobility charity Whizz-Kidz.

Holley Reece-Barkell has been recognised as one of the top 100 Highly Commended Finalists in The Women’s Engineering Society (WES) campaign to find the Top 50 Women Engineering Heroes.

Frazer-Nash is headline sponsor for the Devon and Plymouth Chamber of Commerce Charity Golf Day being held in support of children’s charity, Jeremiah's Journey.

Inspired by Mental Health Awareness Week, Frazer-Nash took the opportunity to engage in conversations with its employees about all aspects of mental health.

Frazer-Nash commits to the Science Based Targets Initiative

Frazer-Nash has joined a growing group of leading companies that are demonstrating the highest level of ambition on climate and paving the way to a net-zero future.

A new app, developed by Cadent and Frazer-Nash Consultancy, will help to support customers in vulnerable situations.

As part of its celebration of International Women’s Day 2021, Frazer-Nash has announced its new membership of diversity and inclusion change-making organisation, WISE.

The winner of this year’s Institution of Engineering and Technology (IET) Young Woman Engineer of the Year (YWE) award has been chosen.

The winners of the Institution of Engineering and Technology (IET) Young Woman Engineer of the Year (YWE) Awards will be announced on Thursday, 4 March 2021.

I’m ok with that